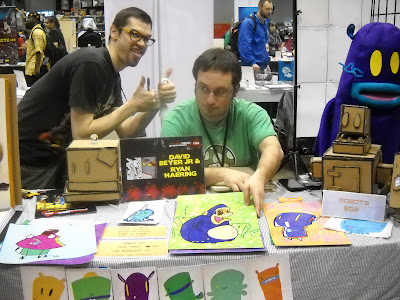 A couple weekends ago I exhibited at my first major mainstream comic convention.  I say this because I've done a bunch of smaller shows(SNAP, Staple, Madison and Milwaukee Zine Fests), and a couple larger indie shows(Stumptown, SPX, MoCCA).  This was the first time at one of the larger shows.  It was a lot of fun and I learned quite a few things.

The reason I'm posting a few days later was to let the con sit in my head for a little bit and really think about what went down and put together a thorough post.  I hope you get as much out of it as I have.

What went down.
I was splitting a table with Ryan Haering.  He showed up at Courts house a little before six on Friday morning and we were on the freeway by about 6:30 trying to beat the dreaded Chicago traffic.

We went to the hotel first and were planning on walking to the show with our stuff.  However after double(triple?) checking the map/ directions we decided it would be better to just drive to McCormick Place, get our badges and drop off our stuff, and then return the car to the hotel parking lot.

McCormick place is frickin' HUGE.  So, we got lost a couple of times driving through the underbelly of the convention center.  Also, after having made the drive in, we decided it would be better to just park the car in the outdoor lot.  Parking was $14 for the day.  Not too bad, considering it's what?  $18 for the day in Rosemont.

Friday was a little slow.  I went to the DC Comics talent search panel where I found Cory Smith.  Mark Chiarelo came out, gave his spiel and then took a few questions.  After that I took advantage of being away from the table and found Javier, Justin and Ian at their table.

After the show closed, we found our way out of the parking lot and got back to the hotel on Friday night much easier than we found our way to the con.  We basically watched cartoons and ordered up some deep dish pizza.  I sketched a little bit and we all passed out. 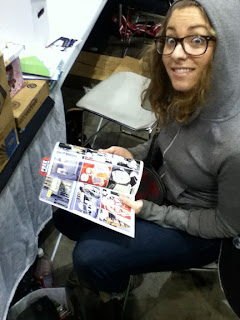 Comics are for reading.

We walked in on Saturday morning.  This was clearly the busiest day of the show, as per usual.  The exhibitors space was crammed at many points and the aisle in front of our table got pretty backed up at times as well.  One of the people who stopped by was Ed Dunphy who was exhibiting with one of his artists down the aisle a ways.  He's a guy I had known of through LinkedIn.  Check out his book, Mongrel. 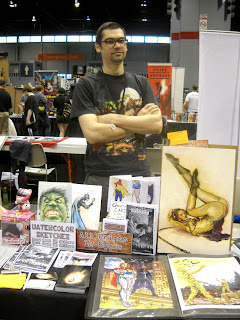 You must man the booth.

During the show, a kid was taken with a Juggernaut sketch I had done.  He asked if I could drop the price a little.  I knocked three bucks off the price for the kid basically because he expressed interest and I could make more (paintings that is). I don't want to get pretentious, but I'm willing to barter a bit.  What is your work worth, really, if it remains unsold?

Saturday we headed over to the Hyatt to met up with a few people for some drinks.  Before we went, we ran down Michigan Ave a little ways to a convenience store and picked up some Dr Pepper and a little Jim Beam. It was a good thing we did, because the bar was packed and people were spilling out into the lobby.  I went out for a smoke with Javier and Courtney still didn't have a drink.  It took her About 40-50 minutes to get anything.

So met Javi and Justin at the bar.  Met Tom and his friend Troy Peteri.  Then Cory showed up and we drank a bit and were smoking cigarettes outside when it began to rain.  Cory took off and Ryan, Court and I went up to Javier and Justins room to wait out the rain and watch some Greg Giraldo. 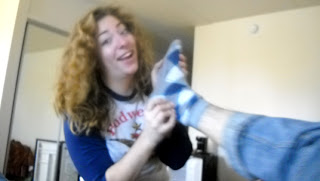 
Sunday was my best day.  I got a few more sketches done including one of Rita Hayworth.  Its looking a little squashed in the pic below, but thats the iPod for ya. 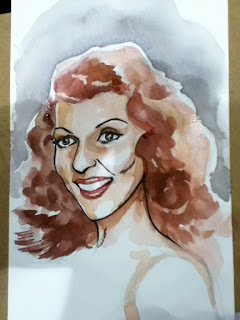 It was a good day and I got to spend a little more time walking through the artists alley where I got to meet Kurt Wood, whose blog I follow, but had never met in person.  We also did the drawing for the Slave Leia painting around 3 and Colleen M. won herself the piece. 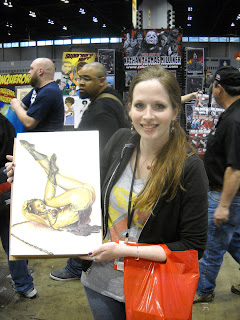 Near the end of the show I walked about a bit and picked up a couple of the Alec books for a buck a piece.  What a steal. 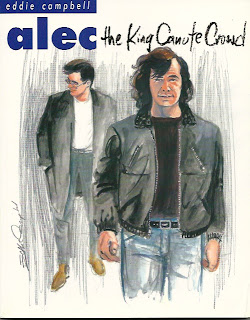 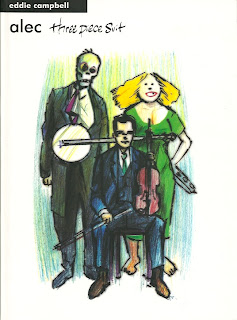 The show ended, we packed up and drove back to Milwaukee. 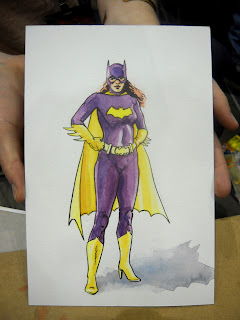 What I Learned
More than anything this show taught me how to do the next one better.

Table Set Up
The first day we were in such a rush(unnecessarily I think now) to get set-up that we didn't consider how the table looked quite as much as we should.  Most of my books were laying down on the table and only the painting stood up.  However, I had it sort of shoved over all the way to the right side of the table.  One of the easiest ways to improve visibility is to get vertical.  The next day I rearranged the layout of my table to get more vertical mileage.

During set up I realized I brought too much stuff.  Between the portfolio, mini-comics, postcards, Courtney's greeting cards and the Slave Leia painting on my side of the table, there was no room left to draw.  I put the two newest mini-comics out and let rest stay in the bag until the last two hours on Sunday after I gave away the painting. 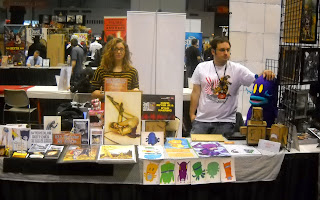 the table on Saturday and Sunday
Prints
I had basically three prints.  One was the Worlds Finest print (see earlier post) and then I had two pieces of horror art.  The friendly Frankenstein/ Mummy piece, and one of vampires looking bad-ass.  Not one of any of these sold.  Of the pieces I saw people carrying around, the Ninja Turtles were big, Poison Ivy and the Avengers came in second and TV related prints would be third.  I saw a number of Walking Dead and Breaking Bad prints in peoples hands.  The big lesson here is, have more variety of prints.

Ryan's cute/ food related prints also got quite a bit of attention. 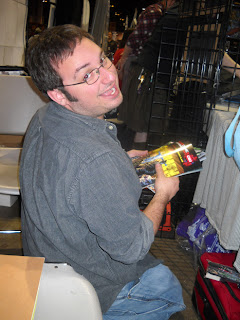 My prints weren't on display.  They were in the first part of my portfolio.  Having the prints in the portfolio with the rest of the work isn't the best way to do it.  I saw a lot of people stop looking through the book after they hit sequential pages.

It's probably a good idea to list prices with every piece for sale in a book of prints.  I had a sign on the table, but I noticed that the booth next to us were getting asked how much their prints were constantly.  They had a sign that listed a blanket price of $10/ print.  I'm guessing that because their booth had so many prints displayed that people just got lost and had to ask. 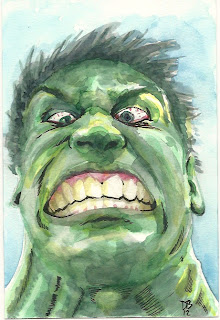 Summarize it, Fool!
In the end C2E2 was not nearly as good as I had hoped it would be sales wise.  There was a lot of larger/ well known artists and I think the table suffered from the too much too close syndrome.  Still, I would say that the show was successful.  I met some cool people, got my work into peoples hands that I wouldn't have been able to otherwise, and got a better idea of what being at the larger con from the perspective of being behind the table. 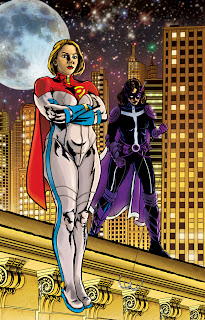 I'll be at C2E2 this year in the Artists Alley with my good friend Ryan Haering.  I'm bringing some mini-comics, prints AND I'll be doing watercolor sketches.

Exclusive to this years C2E2 is a print of The New Worlds Finest.  They are limited to 50 and each will be hand numbered and signed by me. 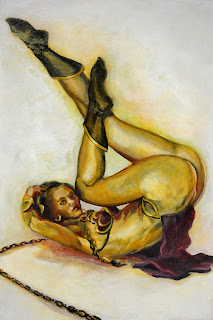 I'll also be raffling off my "Princess of the Month" painting of Slave Leia. Entry cost will be but One American Dollar.  Oh my. 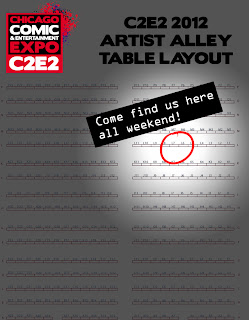