Saturday I hit up Fallcon at the Minnesota State Fair Grounds.  Javier, Mike and I drove up Friday night through a hurricane and met my old pal Drew at the hotel.  It was a pretty good show and super comics-centric.

I got to talk to a handful of kids from UW Stout that were tabling with their class.  Apparently they have split their multimedia major into comics, animation and film.  It's good to hear that more and more schools have comics related majors and classes.  That means more legitimacy, funding and, ultimately, more and better comics.

During the show I worked on this Kingpin/ Daredevil piece. 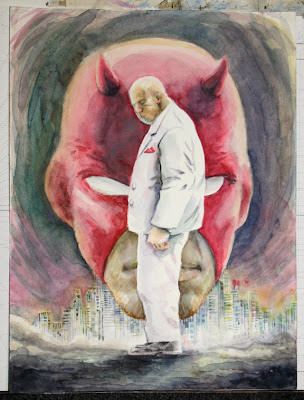 It's nearly done.  I still think it needs a bit more work.

One of the nicest parts about this show is the amount of assistance the fantastic volunteers provide.  They bring water and sodas around.  Someone made superhero themed cupcakes and there was a nice exhibitor area with a free lunch.  I love that they have lunch provided.  Con food is usually expensive and you've got to have a back-up person to watch your table.  It was great that the volunteers would watch your table if you needed to make a run to the can or for some food.

For those interested I had two hot dogs, potato salad, and a few pickles.

I met another artist from Wisconsin that was walking around.  John McN Rosebush III (according to his business card) was nice enough to give me one his prints. I also met Dan Jurgens.  Drew got me into comics by showing me Superman the Man of Steel #22 and Superman #78 as the Reign of the Supermen started.  I was so pissed off that it really seemed that the Cyborg was the "real" Superman I started buying the books.  So he was one of the first artists I was reading.  I thanked him for killing Superman and we agreed that the Battle for Blüdhaven was a weird project.

I didn't do too much shopping, but did get to grab a few things in the last 15 minutes.  I picked up a copy of The Halloween Legion.  My old roommate Thomas Boatwright illustrated the majority of the book and it looked pretty cool.  The writer had a table kitty corner across the aisle from me so I had to pick up a copy. 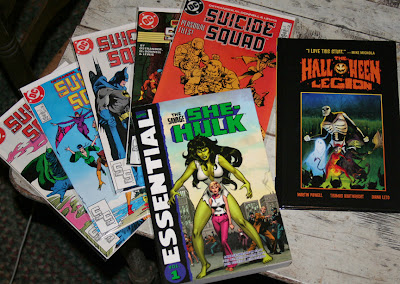 I also found a few more issues I was missing of the Ostrander Suicide Squad run from Captain Jacks Comics, and grabbed She-Hulk Essentials vol. 1 for Courtney.  She's quite fit and I like to tease her.